Plant of the Week 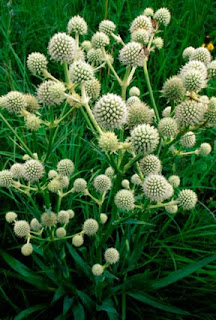 Rattlesnake master
Eryngium yuccifolium Michx.
other common names: button snakeroot, yucca-leaf eryngo, corn snakeroot, water-eryngo, rattlesnake flag, rattlesnake weed
Eryngium: from the Greek for “a prickly plant,” referring to the apparent prickle-like leaves of this plant (although they are neither prickly nor sharp)
Yuccifolium: from the Greek for “yucca leaves,” referring to the yuccalike appearance of the leaves
Parsley family: Apiaceae (Umbelliferae)

Photograph by Thomas Rosburg, Wildflowers of the Tallgrass Prairie: The Upper Midwest, Second Edition
Posted by Bur Oak Blog at 7:03 AM No comments:

You are seen as an expert in all things gardening in Iowa City and beyond. But I bet that you learned something from writing this book. What did you learn?
From an author’s perspective, the most important thing one learns in writing a book is how to write the book itself, for every book, given its unique subject matter and form, involves a distinctly new challenge. When I started Weathering Winter, I imagined that every day would involve me in describing a different wintry scene in and around my neighborhood, but after a run of 9 overcast days, I realized that I would have to expand my horizons, taking account of winter weather around the world, past and present, actual and fictional, outside and inside my own head. In other words, I learned something about winter. I also learned that the seasons never quite match our expectations, for the winter of 1995, which is featured in the book, turned out to be much shorter and milder than usual, so much so that I was able plant my radish seeds outdoors on March 15, earlier than ever before.

What advice would you give to budding authors who want to focus on gardening?
The most important resource for any garden writer is meticulous record keeping—a journal taking stock of everything one does in the garden, everything one notices in the garden, and every aspect of the weather such as temperature, windspeed, rainfall, and so on. Given the vagaries and distortions of memory, one’s journal should always be close at hand, so that notations and impressions can be made as quickly and accurately as possible. A few hours after the fact, one might remember things somewhat differently from the moment of observation, as I discovered from my own early experiences of record keeping. A detailed and accurate record of one’s garden (or the garden of someone else) will provide a storehouse of reliable information for gardening articles, essays, and memoirs as well as a point of reference for one’s garden planning in years to come.