In preparation for the upcoming second edition of A Practical Guide to Prairie Restoration by Carl Kurtz, we're excited to be sharing Carl's beautiful photos and observations about nature!


Carl Kurtz is a professional writer, teacher, naturalist, and photographer. He and his wife and partner, Linda, live on a 172-acre family farm in central Iowa that is one of the few prairie seed sources in the Midwest.

Virginia bluebells (Mertensia virginiana) are early spring plants of moist woodlands and are often found in floodplain forests.  They normally bloom from mid-April through mid-May in the upper mid-west. This year due to the unseasonably warm spring weather, they are 3 weeks to a month ahead of their normal seasonal schedule. I have seen their flowers covered with wet snow in late April.  Check out large patches carefully and you may find a plant with white flowers.  They make excellent yard flowers as they die back to the ground in late May and do not appear again until the following year. 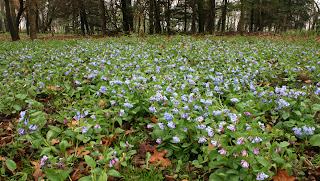 The World Beneath your Feet: Iowa's Prairie Legacy 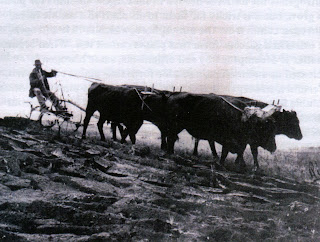 When early settlers ran the first plow through virgin tallgrass prairie, they soon discovered how deep and dense the prairie root system was. New Jersey tea was known as the pest of the plowman or rupture root because its huge taproot would damage plows. Leadplant was called prairie shoestring due to the sharp, snapping sounds made when a plow point tore through its rootlets. A regular plow and a mule could not cut the tough sod, it took a breaking plow and a team of oxen. But break it they did. A good team and a long day of backbreaking labor could plow up one or two acres. Within one generation, early farmers—without modern equipment—plowed 99% of the Iowa prairie into cropland and stopped the cycles of the tallgrass ecosystem. Over thousands of years the prairie had built soil so rich and deep that it has been productive cropland for decades. Iowa owes its productive agricultural economy to prairie soils.

From Mark Muller's "The World Beneath Your Feet: A Closer Look at Soil and Roots," Funded by the Iowa Living Roadway Trust Fund

Always Put in a Recipe


Creamed Chicken on Toast
1 cup diced cooked chicken
2 tablespoons butter or margarine
2 tablespoons flour
1 cup milk
Salt and pepper to taste
Toast
Melt butter or margarine in a saucepan and blend in flour, stirring until smooth and bubbly. Gradually stir in milk and continue cooking and stirring until it thickens. Add chicken and seasoning and serve hot over toast.


Evelyn Birkby is the author of Always Put in a Recipe and Other Tips for Living from Iowa's Best-Known Homemaker, as well as Up a Country Lane Cookbook and Neighboring on the Air.